Saudi Aramco: Under the Sea in Davos

Saudi Aramco, the largest oil company in the world, wanted their presence at the World Economic Forum in Davos to focus on the Manifa oil field project.

Manfia Bay lies in the Persian Gulf, off the coast of Saudi Arabia. Oil was discovered in 1957, but it lies just beneath the shallow waters of a fragile marine environment, making it impossible to access with conventional shallow water drill rigs. It wasn’t until recently that engineering and technology has advanced to a point where the oil can be reached whilst protecting the environment.

The Manfia Bay Project is a radical new approach by Aramco that involves the creation of 30 offshore platforms on 27 man-made lands. Each is the size of 10 football pitches, made from 45 million cubic meters of sand reclaimed from the seabed.

The wonderful creative agency Brandfuel were tasked with creating the experience at Davos, and knew they could rely on Studio Giggle to help create some of the animated content for the event. Giggle are well known to Brandfuel as a partner that can jump on a technical animation brief at short notice and run with it.

The brief came in a week before Christmas, and the deadline was only a month away. Studio Giggle were tasked with creating 3 aspects of the experience:

The elevator sequence took visitors from space, down into the oil, and finished at sea level

Creative Director of Studio Giggle, Jonathan Brigden immediately got to work, assembling a team in the studio that included a couple of highly skilled freelancers to help tackle the specialist task of the hologram.

Within just a week, 3D pre-visualisations of the walkthroughs were created so that the client could picture the finished product to scale. The script, acting as the voiceover for the elevator experience was ready to be signed off. Marine life was researched and models of the correct fish and coral were being assembled into a bespoke reef. Offsite from the studio, a 3D model of the oil field was being crafted into a hologram.

The turquoise waters are teeming with marine life, from pearl oysters to sea snakes, shrimps, crabs, dolphins and sea turtles, including the endangered Hawksbill turtle.

Due to the lightning fast pace of the project, sign offs had to be immediate, which they were. The project and the client’s expectations were very well managed by the team at Brandfuel.

Studio Giggle is known for standing out as a company that its equally adept at creative and technical, which explains the confidence when it comes to animated content briefs for events. Studio Giggle advised on the tech, and programming choices to help get the most from content.

Animator Iina Kuula and Jonathan were sent to Switzerland for the event, to help with the technical set up, and provide on-site assistance in case of last minute changes. 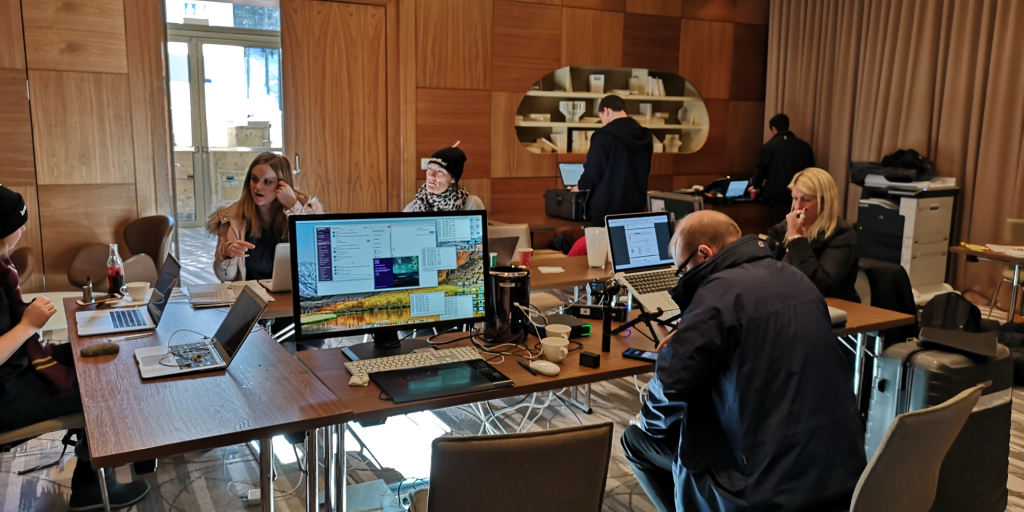 The results were very pleasing. Visitors were full of praise for all 3 aspects of Studio Giggle’s work, and people were seen walking through the experience multiple times, taking photos, and enjoying the engaging content.

To find out more about Brandfuel click here, and to see what else Studio Giggle can create click here.